I read an article recently that highlighted how North Korea is using Hong Kong to launder their criminal proceeds. The article described the use of shell companies established in the region that provide the Democratic People’s Republic of Korea (the official name of North Korea) with access to the global financial system. Severe international sanctions are in place to restrict this access to North Korea, so any advantage they can gain is really important for them to maintain the best access they can.

Unsurprisingly, it’s the US who are leading the way on imposing North Korean sanctions, as US law already prohibits US financial institutions from engaging in transactions with North Korean institutions, including the use of US accounts from a third-country bank.

However, China, who in general terms are quite supportive of the UN sanctions in place against North Korea (despite the fact that they are their biggest trade partner), have expressed concerns over the US essentially using its domestic laws to impose unilateral sanctions on the rogue state.

Despite the heavily sanctioned environment in which they operate – the UN recently passed its strongest sanctions yet against North Korea following its sixth nuclear test – North Korean money launderers are still able to operate effectively, and Chinese companies play a big part in this access. The following graphic illustrates how it works: 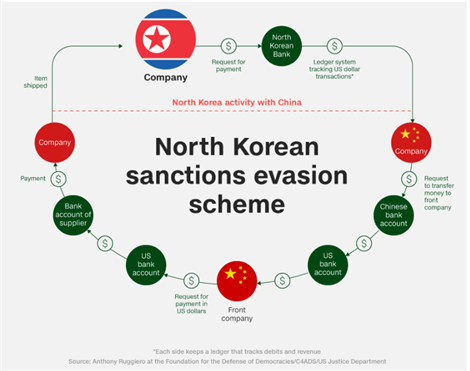 This isn’t the only method used by North Korea to evade sanctions and gain access to global trade and finance. For example, North Korea has registered an unusually large number of ships, including many foreign-owned vessels, as part of its domestic fleet. It has also listed 18 of the 21 vessels in its Ocean Maritime Management Company as domestic ships, even though some of these enter international waters, an approach that allows the vessels to avoid international agency inspections.

North Korea has even exploited its diplomatic status to access global banking systems, by having its overseas diplomats open multiple bank accounts, sometimes in their own names and other times using the details of front companies. These are then used to process millions of dollars’ worth of transactions.

So, just how effective are North Korean sanctions? Well, on the one hand, these sanctions can be effective, but in order for this to happen they need the support of all participating countries, especially China.

Around one-third of North Korean export trade is through selling coal, 98% of which goes to China. What this means is that, without the support of China, these sanctions could, largely, become ineffective. Only very recently, the trade in these goods has been banned under UN sanctions (S/RES/2371), and China have committed to stop the import of these goods in line with the UN sanction, so the crucial support from this key player does appear to be in place.

On the other hand though, North Korea have proved themselves to be particularly effective in finding ways to circumvent sanctions, and whilst they’re able to continue to do so, the restrictions will be somewhat ineffective, and the country will continue to trade on what could potentially be an equal footing with other nations.

Looking ahead, the public posturing between Kim Jong Un and President Trump will continue to fuel the sanctions requirements around North Korea, although it’s probably fair to say that there’s not much more in terms of restrictions that can be done.

What is important though, is that the controls in place at financial institutions operating in the APAC region, particularly Hong Kong, will continue to be severely tested. We must all become much more vigilant in managing the risks that our institutions face, and those operating the controls must do all they can to stem the illicit activity.